Blog - A Palette of Ideas - on being an artist

If Paintings Could Fly

Last month I had a brand new artist's experience with the shipping of the largest commission I had done to date. I had done some work on the phone looking at options to ship between Vancouver and Toronto. I began in April with a research phone call to several companies about the costs of shipping. At one point the client even looked into having me take the canvas off the stretchers, roll it, and ship it that way. The cost seemed rather high, given what I was hearing from freight and cargo companies for a packed complete canvas. Since the work was 3 foot by 4 foot unwrapped, I had quite a large item on my hands.

I went on the internet and looked at ideas for lightweight sturdy packaging and was able to adapt my packing strategy to capitalize on quite a few free materials I could easily find. I had some good tips and went ahead collecting the various components of the end wrapping.

First I wrapped the work in white roll drawing paper that I bought at my local art supply store to keep it clean. Next I wrapped the image side and edges with some scraps of that hard pink 1 1/2" insulation board to protect it. Next I bought two half sheet scraps of 1/4" door skin or mahogany plywood and put one on each side of the work. The next layer was was an appliance box from a dealer where we had bought several appliances over the years. The whole thing was well taped around the edges and in both directions across the middle. Lastly I purchased enough 6mm heavy poly plastic to totally waterproof the whole thing with a last layer. All seams were taped in case the package ran into rain on the tarmac somewhere.

Once my clients had finished their renovations and cleaned up enough, I phoned again to recheck the information from one well known Canadian airline.  Initially their answers seemed too good to be true.  Upon calling back, it all checked out as correct! I was even able to book the wrapped parcel using the actual dimensions, on a flight. It flew on a specific flight due to the fact that it would be on a wide body jet and be built into a cargo container and not laid on top of other loose cargo. I was able to purchase insurance through the airline.

About the only thing they didn't offer me for the painting was a seat with pretzels and drinks! The timing of the Thursday flight meant it arrived in Toronto after midnight which meant arriving on the Friday. This meant that with the weekend looming the buyers had 3 days to pick up instead of 2, before storage charges began to apply.

Once I had it booked it was a matter of taking it to the cargo hangar at Vancouver Airport and signing it in. It even traveled collect so I did not have to put out any money ahead of time and the clients paid the bill at the other end to release the parcel.

Everything was well written out for the client in emails where all agreed to the amount, which turned out to be substantially less than the cost of undoing the work from the stretchers, shipping rolled, and re-stretching. Through the magic of smart phones I was able to track and text the client with the work's progress through the system and they sent me the photo as it arrived on the other end - in absolutely perfect condition.

With good preparation and proper packing I discovered that paintings can really fly, and with less fuss than it would take for a person! 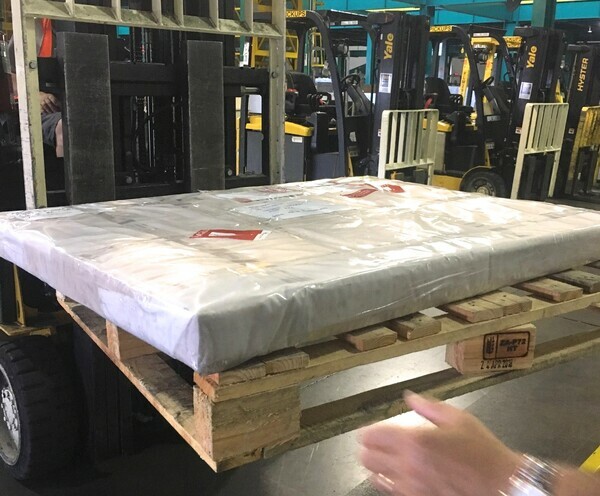