Monica Burrow
Original Art from BC and Beyond

Blog - A Palette of Ideas - on being an artist

Try number two with this entry. The first one disappeared when I posted. Ah, painting is always rewarding, technology sometimes!

This entry is about the way painting in different sizes helps me grow as an artist.

Several years ago I volunteered to give back at the facility where a family member stayed in safety and comfort before they passed away. Over the years my relative was there I grew close to the staff, and decided to keep the connection ongoing. I would paint murals on paper for the residents, many of whom had cognitive impairment. My pieces were 24 FEET long by 6 FEET tall. I had to work quickly to lay in a horizon line, the shape of a building or a person so as to retain the viewers' attention and allow their often compromised brains and sight to register what I was doing. In moving quickly with a large brush, I was able to engage them sufficiently that those who would normally nap if not directly engaged one on one, would stay awake for upwards of 45 minutes at a time!

My art "critics" as I called them would sit sometimes 10 to 25 feet away to see the big picture and allow everyone to be included. The residents would look on with excitement as the image unfolded quickly right in front of them. I was becoming an artist in residence and a bit of a live Bob Ross if you've ever watched those PBS painting shows. I found around the same time my paintings on canvases became freer and more loose as I found confidence to move to bigger brushes and less detail in my work.

At the same time I was asked by a Gallery owner, on the island where we own a vacation property, to show work and we decided with her clientele that I would mostly show small pieces under 12" x 12". The price point is great for tourists, who may be packing their lives with them in carry on sized luggage, and so began a series of  3" by 4" works, that function like little wooden postcards. (see the Gallery Minis Sold, some still for sale are hidden among the Southern Gulf Islands and BC Coast Gallery and some in the Fraser Delta Gallery). Some have flown to New York City to small apartment walls, one 5" x 7" hangs in Ohio on the wall of a couple who became engaged at the spot in the painting. People come back year after year to pick up a new one to remember a warmer week when they left their cares behind and went on holiday.

I began selling some larger paintings. A 24" x 36" sold locally. (see " Pumpkin Time on Westham Island" in the Fraser Delta Gallery) .Then a 3 FOOT by 4 FOOT commission came in from far away in Central Canada (see "Fitzsimmons from Whistler" in the Vancouver Whistler Area Gallery). In every case these large works freed me up to use broader strokes, larger arm movements, and bolder colours than the little ones.

Each time I moved from small to big or big to small I noticed a need to simplify. If I began painting big, I had more ground to cover. The skeleton that one hangs a composition on became crucial as I needed the piece to hang together and not take decades to complete. When I moved from several large ones to the minis I found I had to simplify as the amount of area would simply not hold every little thing.

On both extremes I had to distill the image in the same way, but for different reasons. Whether I paint with a 2" or 3" brush, or a 1/4" or 1/2" brush I am painting with a large brush if my brush is large relative to the size. Getting out of the 11" x 14" and 16" x 20" comfort zones actually taught me that I have many more comfort zones than first thought!

It's been a rewarding discovery. 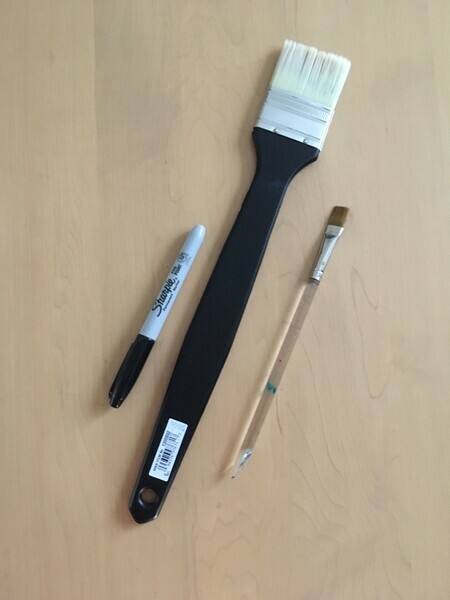